Father Agbor Isek , msp is a member of the Missionaries of St Paul of Nigeria.

Sister Jennifer has been Parish Sister at Our Lady’s since the year 2000.  She has been in Religious Life since 1956 and has served as Head of Stella Maris School (now Blessed William Davies School) for fourteen of the twenty years she served there.  While still in the School, Sr Jennifer turned her home into a retreat and respite centre for nuns and for those they cared for, and Sisters from all over this courntry and Ireland spent memorable holidays there.  On becoming Parish Sister, Sister Jennifer generously gave to the Diocese her home in Caroline Road (Seren y Mor) which has since been converted into three fine flats for retired diocesan priests. For theses, and for innumerable other reasons, she was awarded the Pro Ecclesia et Pontifice Medal from His Holiness Pope John Paul II. 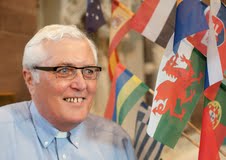 Fr Antony was born at Holywell and baptised, confirmed and ordained at St Winefride’s Church there.  He studied at the Gregorian University of Rome from 1960 to 1967.  Since his ordination, 11 September 1966, he has served in the Diocese, with the exception of a five year period beginning 1972 when he was seconded to the Catholic Missionary Society based in London and giving parish missions across the UK.  He served as curate in  Mold, Llanelli,  and Connah’s Quay before joining the Catholic Missionary Society. On his return to the Diocese he has served as Parish Priest of Ruabon, Pwllheli and Llandudno.  He came to Llandudno on 15 January 1998.

Father Abraham Varis, Assistant Priest has now moved onto his own Parish.